History of Samarkand is about 2500 years old and its architectural landmarks dated back to the times of the Timur Dynasty is of the same importance as architectural masterpieces of ancient Egypt, China, India, Greece and Rome.The Registan ceremonial plaza, the centre of the medieval Samarkand, is the outstanding example of town-planning skills of the Central Asian architects of the 15-17 centuries. Registan, is surrounded on three sides with the magnificent buildings of Ulugbek, Sher-Dor and the Tillya-Kari madrassahs. The Registan ensemble is where all the radial streets meet and it is here that ruler’s decrees were proclaimed, where justice was done and trading in full swing.To the South of the plaza is the Gur-Emir Mausoleum (15-17 centuries), built as a burial place for the members of the Timur Dynasty. Here lies the body of Timur, ruler of Samarkand, as well as his grandson Ulugbek, an outstanding scientist and astronomer. Ruins of his observatory, with pieces of giant sextant, were unearthed in the outskirts of Samarkand early in the 20 century.It was during Tamerlane’s rule that Samarkand achieved an unprecedented growth. Samarkand is also well- 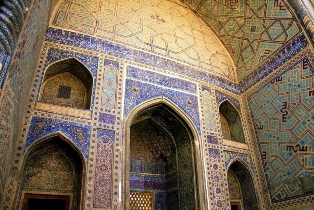 known for its brilliant great scientists, writers and painters like Rudaki, Babur, Jami, Avicenna, Navoi, Ulugbek, Mukimi, Furkat.Samarkand is a city full of legends. Even the streets, ravines and water reservoirs have its own tale.The Shakhi-Zinda architectural ensemble (14 century) was considered to be a Holy place. Once it was the largest religious and cultural center in the Central Asia and pilgrimage to this place was of the same importance as the pilgrimage to the Holy Mecca. The name, which means Tomb of the Living King, refers to its original innermost and holiest shrine- a complex of cool, quiet rooms around what is probably the grave of a cousin of the Prophet Muhammad-Qusam Ibn Abbas.In the foothills overlooking Afrosiab to the northeast are the remains of the remarkable observatory of Timur’s grandson Ulugbek. The building was destroyed by fanatics in 1449 and visitors can view the underground section of a vast largest 90^ quadrant the world had never seen. The sextant is now covered by a portal and vault at the center of the observatory’s foundations.Besides the cultural sightseeing there are many rest and recreational sites in Samarkand.The Zeravshan Nature Preserve was established on the flood lands of the Zeravshan River with thickets of sea-buckthorn providing refuge

for hares and rare Zeravshan pheasants.In the vicinity of the Takhta-Kiricha there is a scenic forest of Aman-Kutan, where some archeological fragments were found and some fascinating legends could still be heard.After the seventeenth century the situation in the country changed. Never did architecture in Samarkand reach such heights again. But the ancient city continued to exist, and now it is once more a thriving, developing city, one of the industrial and cultural centers of Uzbekistan.