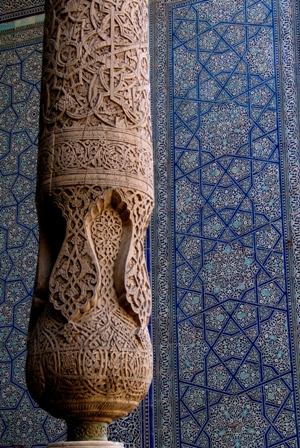 Khiva- open air city museum, is one of the most ancient cities of the Great Silk Road. In it's time, Khiva was considered as the largest trade center in Khorezm and played a very important role on the Great Silk Road. The early information on Khiva has appeared in "Avesta" by the historian Herodot. Khiva is considered to be of 2500 years old, and this information is confirmed by the archeological excavations and findings in the region.

The location of Khiva by the Amu Darya river has played a key role in the development of the city in early ages. Khorezm was the scene of many battles for Alexander the Great, and the Arabian army. Under the command of Kuteyb-ibn-Muslim, his army attacked Gurgandzh (former capital of Khorezm) in 680. After some centuries, Chengiz Khan and his united army managed to get into the capital after destroying the damns on Amu Darya river and a year long siege. In consequence of the damns being destroyed, city was wiped off by the water. Some 200 years later the capital of Khorezm was revived.

In IX and XII centuries, a number of Muslim educational institutions, large centers for science studies functioned successfully in Khorezm. The most well known was the Mamun Academy of Khoerzm, which recently celebrated its 1000th anniversary.

Amir Temur pursued five campaigns in Khorezm in the XIV century but only in 1388 did he manage to win it completely. In due course, Khoezm blossomed again, and in a short time became one of the important spiritual centers of the Muslum world. After Khiva's khanate was formed at the beginning of XVI century, Khiva became it's capital in 1598

Inner city of Ichan-Kala with its dozens of huge buildings, mostly mosques and madrassahs, tightly embracing Tash-HauliPalace and Kunya-Ark fortress, was rebuilt within less than two centuries. 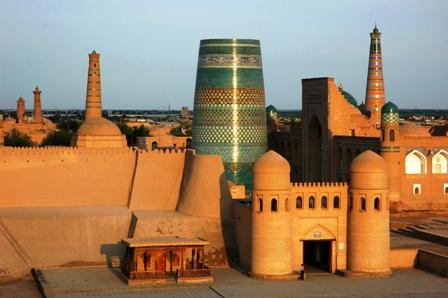 Monumental architecture of Khiva of the end of the 18th - mid-19th centuries formed this newly built city and the energy with which the city grew up in the course of only two-three generations of masters fascinates us until now. What could be ruinous for the urban settlement in different circumstances, namely casual constructions on little spots of land alongside with rather high congestion of population, became a source of unusual diversity of architectural forms. Ichan-Kala in particular, this most densely populated part of Khiva, became as the fate willed an architectural museum whose buildings represent the best masterpieces of ancient architects.

Traditionally, the spiritual centre was a congregational or Friday mosque. Juma mosque in the Ichan-Kala was also rebuilt at the end of the 18th century; however it preserved the features of classical buildings of the East. This peculiar one-storied building without portals arches and domes has a big hall with a flat roof resting on 213 wooden carved columns. It is just these columns, varied in shape and form that are of special value in this mosque. The scientists believe that all these particulars bring it closer to the old mosques of Arabia. 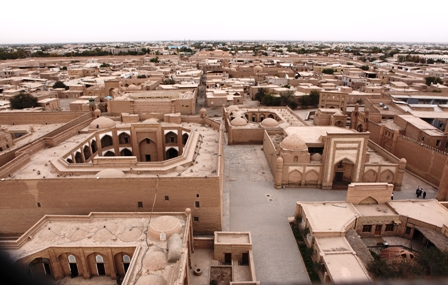 The biggest madrassah is Mukhammad Amin-khan madrassah. Its double khujras are just fantastic. The facades are trimmed with coloured bricks designs and majolica tiled bands of vegetable ornament. The doors and pandjara are decorated with a wonderful carving. It is difficult to imagine a medieval city without external walls and towers, without a citadel inside. Khiva is not an exception. Since olden times Ichah-Kala was surrounded with the massive outer walls. And in the middle of the 19th century a new wall with ten gates was built around Khiva. Since that time the big ring of the city started to be called Dishan-Kala or the "external fortress". And inside Ichan-Kala there was Kunya-Ark - "the old citadel". Built at the end of the 18th century, it included an arsenal, a gunpowder factory, the palace, the court, the chancellery, the mint, a mosque and a drill square for military training. Kunya-Ark also housed a harem - two-storied building with the inner courtyard and the pool, with many chambers and living quarters. The most important building here is the Kurinish khan Palace, which was used for official receptions. In addition to throne halls, the palace housed the treasury and manuscripts depository 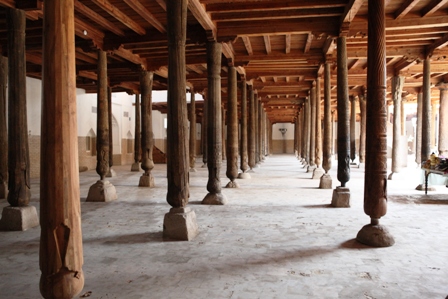 The big ensemble of civil and religious buildings was formed in the 19th century next to Palvan-darvoza gates. The leading place among these buildings is given to the main palace of Khiva khans - Tash-Hauli, which was built in the middle of the 19th century. The facade of the palace and the surface of the walls surrounding inner courtyard are trimmed with ornamental majolica where blue and ultramarine colors dominant. The ancient masters knew the secret of making coloured ceramic glaze called "ishkor", the dyes of which keep their original colors for centuries.

Khiva is one of the first Central Asian cities to be added to the list of UNESCO world heritage list, being added in 1990. In 1997 Khiva celebrated its 2500th anniversary.