A tourist entering Uzbekistan completes a customs declaration form, which must be retained until departure. This allows one to bring in and out of the country articles intended for personal use, including currency and valuables, which must be registered in the declaration form. Customs inspection (if any) of luggage is conducted in the presence of the owner at the exit-entry points.

Please note that provisions of the customs law of Uzbekistan restrict the list of some items for being brought in or being taken out of the country.

To make you feel more confident and to avoid any possible unpleasant incidents contact our experts.

While preparing for a trip to Uzbekistan or to any of the Central Asian countries medical insurance, including emergency evacuation, should be taken care of.

The question of vaccinations is completely at one’s own discretion since Uzbekistan and other Republics of Central Asia require no vaccinations.

The strictest attention must be paid to the local food and especially to the quality of tap water. The former has special ingredients such as local spices and a lot of grease while the latter has an unusual flavour and is full of chlorine. When tea, boiled and bottled water are unavailable, purify tap water with iodine tablets.

Among the other distinctive features is the high risk of sunstroke, thus precautionary measures must be taken while under the sun.

As with the other Central Asian countries, Uzbekistan runs on 220 volt, 50 A with round 2 pin continental plugs.

All tourist destinations in Uzbekistan are full of fabulous vistas and picturesque views and to avoid disappointment, please ensure that you take enough film for your needs, since there may be difficulties buying suitable film locally. There are few restrictions for taking pictures. One should bear in mind that it is prohibited to take pictures of airports, railway junctions, tunnels, bridges, military installations. It is also advisable to ask the permission of the local person/persons you intend to take a picture of.

Taking interior pictures of the museums and art galleries is allowed provided the appropriate surcharges are duly paid.

Uzbekistan is +5 hours ahead GMT all year round.

Travel is most pleasant from the brief spring (March) that transforms the dull dunes of the desert into multi-coloured floral carpet until early June and from September to early November, when tree-lined streets shine in autumnal glory.

Though spring and autumn are traditionally the times to visit Uzbekistan, there are no limitations though. It is possible to travel all year round, including the periods outside the defined ones, when the weather can be just as good.

Heli-skiing activities are limited to end of February – beginning of April.

Clothing needed in the country

Light-coloured cotton clothes are the best for summer time. Trousers, long skirts and long sleeved shirts of conservative type prevent sunburnt and respect Muslim sensibilities. Although not many people pay attention to this question in major city centres, flesh must be covered when visiting any holy site.

In the cities open sandals and plimsolls are good for walking while shoes and sneakers are best for exploring ancient sites and monuments.

In colder weather jackets or light sweaters are good in the evenings and for hiking in the mountains. In the desert be ready for nightly temperature drops.

Uzbekistan has both the legacy of Soviet holidays and national holidays, many of which were rehabilitated during Perestroika and independence. The most valued public holiday restored only in 1989 is Navruz — the Central Asian New Year that falls on March 21 in Uzbekistan.

Every year in Uzbekistan two major Muslim holidays are observed: Iyt Ramazan (end of Ramazan lunar month – Muslim month of daytime fasting which is ensued by a feast) and Iyt Kurban (day to offer sacrifices) when Uzbeks visit the graves of relatives. The dates of both holidays depend on the cycle of the moon.

National holidays and festivals of Uzbekistan

There is a variety of yearly fes 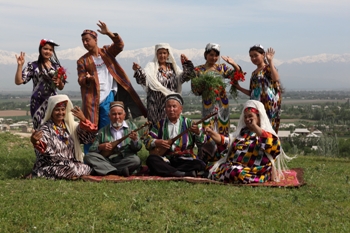 tivals held in Uzbekistan, too. They are very popular with the people and treated as holidays. One of them is the folk festival ‘Boysun Bakhori’ (‘Boisun’s Spring’), which is held in the mountainous Boysun District, Surkhandarya Province in mid-May. The way of life of many generations has remained almost unchanged in this area. Each family preserves and passes down from generation to generation the standards of home arrangement, old rituals, traditions and customs that date back to the age of the pre-Muslim pagan culture. In Boysun ritual songs and dances, performances of the akyn narrators of folk tales and legends continue to live their natural life, not as a theatrical performance for tourists.

It is here that a thousand years ago akyn narrators composed the heroic epic ‘Alpamysh’. The people of Boysun consider themselves to be the descendants of the legendary Alpamysh. They tell stories about him and his deeds relevant to surrounding gorges and villages. Thus it is no wonder that along with 19 other regions in the world, in 2001 Boysun District was included in the UNESCO List of ‘Masterpieces of the Oral and Intangible Heritage of Humanity’.

Every year the participants of ‘Boysun’s Spring’ come from scores of countries. The festival attracts a lot of professional and amateur folklorists. During the festival one can travel in time and learn the ancient secrets of fire-worshippers’ rituals and shaman cults, make acquaintance with the life of the distinctive region where culture and traditions of ancient peoples have been well preserved.

The international musical festival ‘Shark Taronalari’ has become very popular and prestigious. For the first time it was held in Samarkand in 1997 on the initiative of Islam Karimov, Uzbekistan’s President. The venue of the festival was not a random choice at all: they took into account the fact that Samarkand – as an ancient center of the Great Silk Road and a depositary of the cultural heritage of the Uzbeks – is of great significance not only to Central Asia but to the countries to the east and west.

The first festival was a success beyond expectations. Folk music performers from 29 countries took part in it. The fifth festival held in August 2005 attracted a record number of participants and visitors from over 50 countries. Unforgettable were the performances of the throat singing band ‘Uran Khai’ from the Republic of Tuva, (Altay, Russian Federation), the folk singer Simara Imanova from Azerbaijan, Chinese and Indian musicians. Everybody was deeply impressed by the Uzbek performers of the ancient national musical genre makom.